It’s pretty ironic that Daisy’s name is after a flower because right now she smells as bad as bad can get. She’s laying five feet away from me, outside, and the stench of skunk keeps hitting me in waves. The other night our little family was invited over to Steph and Dave’s new place in Hollywood Hills for a dinner party along with the McKemy’s and we wrecked havoc on their new place.

Daisy and Taj were so excited to investigate their yard that they ended up finding a skunk and Daisy got sprayed right in the face. She walked up to me pathetically with her eyes blinking and burning with a look that said, “Help.” So not only were we late to the party, now we had to deskunk our dog. Luckily, Steph came to the rescue with a bottle of Classico sausage pasta sauce. I dumped the whole thing on Daisy’s stinky head and rubbed the sausage chunks and tomato sauce all over her face. She was in heaven eating the sausage bits and I was in hell trying to get rid of the horrible stench. Surprisingly, it kind of worked along with a quarter bottle of Dove shampoo. The rest of the party was awesome (minus all of the destruction that we did in their house). True to form,  what started as a grown up dinner turned into a night of debauchery with homemade foil hats, cigars, awkward Insta videos and giant martini glasses.

The next morning, Matt and I put Daisy in a large trash bag and put her in the car. With only her head sticking out (the part that actually got sprayed by the skunk) we finally got her home. The night of drinking, the windy roads back home and the smell of skunk in the car was completely nauseating. We got home and took care of Lady, only for Daisy to find a huge rat in a bucket of horse feed. She proceeded to try to eat it. Did I mention that a couple of days before that she found a fly trap bag full of disgusting liquid that smells like dead animal carcasses to roll in? That was probably even more nasty than her skunkification. Daisy has always been a wild thing. She’s rolled in dead birds and fish on the beach, and one time found a dead rattlesnake to roll in (luckily it was dead). Living in the canyon has definitely reminded us that Daisy is more like a feral dog than she is a tame little apartment dog. She can truly be a little bitch sometimes too, as she  demonstrated by beating up our friend’s dog at our party last weekend. Dogs will be dogs, and Daisy reminds us of this often. Does anyone know of a good dog trainer? Just kidding.

Ever since we’ve moved into our little Brown ranch, Daisy has done nothing but sit outside and watch nature do it’s thing. Trapping her in our little apartment squashed her little soul in the past. She’s been so happy out here, being able to be a dog and roll in whatever she pleases. She loves to watch all of the birds and sit on the porch watching over her domain. She loves following me around as I take care of Lady and clean up outside. She loves watching for the coyotes and raccoons and barking at them to go away. She’s as happy as can be just like me. I love my crazy little feral Daisy no matter what kind of trouble she finds herself in. 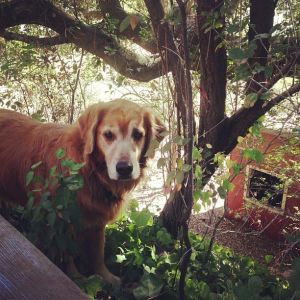 Welcome to Dog Gone Tech Girl! Join me as I share my entrepreneurial journey- the ups, downs and all arounds of doing business.

What we’re talking about…

People and their dogs who have sniffed us out